Background and Objectives: The rapid growth of the world's population in recent decades has led to growing problems in terms of water supply and agricultural resources, and limited water resources are one of the major problems in the agricultural sector. The treated urban and industrial wastewater, which its pollution load is reduced by adding amendments, can be a suitable way to provide plant water and nutritional requirements. Thus, this research aimed to investigate the effect of different amendments on soil properties irrigated with wastewater from Bu-Ali industrial region in the Hamadan province.
Materials and Methods: For this study, treated wastewater was collected from Bu-Ali Industrial town, Hamadan Province. The greenhouse experiment in the Bu Ali Sina University was conducted in a completely randomized design with three replicates with loamy soil irrigated with wastewater. In this research, nine treatments including citric acid, compost, manure, gypsum, composite treatments (gypsum+ manure, gypsum+ compost, citric acid+ manure, citric acid+ compost), and control (27 sample) were used to investigate the effect of these amendments on some chemical properties. Soil properties were measured before and after the application of treatments. These properties included pH, electrical conductivity, cation exchange capacity, organic matter, total phosphorus, and available phosphorus and heavy metal concentrations such as lead, nickel, cadmium, and micronutrient such as zinc, copper, iron, and manganese were also measured.
Results: The results showed that the applied wastewater was considered to be unsuitable water with large quantities of sodium. The application of various amendments such as compost, manure, and citric acid in soil irrigated with wastewater can significantly reduce soil salinity (from 2.53 in the control treatment until 2.16 in the compost treatment). The effect of amendments on some chemical properties revealed that the addition of different amendments to the soil irrigated with wastewater resulted in significant changes in pH, electrical conductivity, cation exchange capacity, organic matter, carbonate equivalent calcium, Ca, Mg, and Na cations, total phosphorus, and Olsen phosphorus. The lowest total copper content was observed in the control treatment with an average of 13.84 mg kg-1, whereas the highest content of this element was seen in the treatment of 50% gypsum + 50% compost with an average of 14.93 mg kg-1.
Conclusion: Furthermore, the total and available concentration of heavy metals (Pb, Ni and Cd) in soil treated by amendments was mostly higher than the control soil. However, their values were lower than those in the soil and therefore, it had no adverse effect on the soil in this respect. There is also no problem with other soil characteristics such as salinity. In general, the results demonstrated that the use of these amendments can be a useful way to reduce pollution levels and the absorption of heavy metals in the plant. 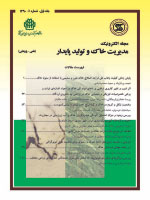